One more post to recap our final days in Ecuador.

Wendy has already done a great recap of our time on San Cristobal and Isabella Islands. As she mentioned, there were a few activities that I enjoyed on my own or with Caleb. The first was a kayaking and snorkelling tour in Las Tintoreras (with Caleb), the second was visit to the very moving Wall of Tears and the third was a hike up to the crater of the largest volcano in the Galapagos, Volcan Sierra Negra.

Las Tintoreras offered Caleb and I the chance to see many of the same wonders that Wendy wrote about during her Las Tuneles tour (minus the tunnels!) by kayak. We saw penguins and blue footed boobies up close and snorkelled with sharks, rays and sea turtles – all very cool. Kayaking is definitely one of my favourite ways to immerse yourself in nature.

While Wendy and Kieran did their snorkelling tour, Caleb and I rented bikes for a ride to visit the famous Wall of Tears. Built over a 14 year period period in the mid-20th century, the Wall of Tears is a monument to a less flattering aspect of Galapagos history.

The rugged environment and relative isolation of the Galapagos has led to a number of attempts at populating them. Many of these attempts were unfortunately led by unscrupulous leaders and on more than one occasion drew heavily on taking convicts from mainland Ecuador either to facilitate their punishment or provide cheap labour to support whatever enterprise said leaders had in mind. The prisoners brought to Isabela in the 1940s and 50s were tasked, as punishment, with chiseling volcanic rock from a quarry on the shore and carrying the rock several kilometres into the jungle to build a completely pointless wall.

The hot and fatiguing bike ride Caleb and I completed to get there gave us little doubt as to why many of these prisoners died in the creation of this cruel enterprise (reportedly resulting in thousands of deaths during it’s construction). Caleb and I were both very moved both by rugged beauty we passed through to get there and the horror the site represented. Another aspect of what made our time on Isabela Island so memorable. 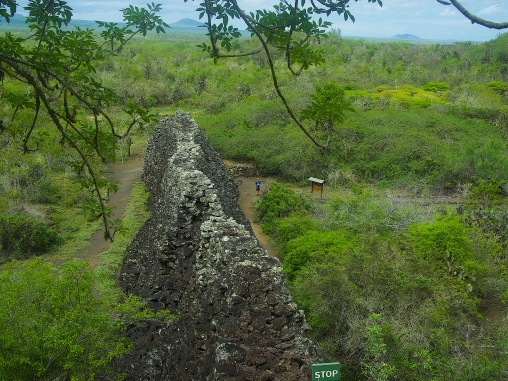 The Wall of Tears (see Caleb below for scale)

Heron, captured at the beach en route to the wall

Galapagos Giant Tortoise we met while biking to the wall 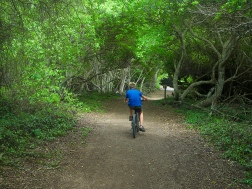 A hot, but beautiful bike ride

The volcano hike I did on my own (no one else was up for the 16km and rainy hike for some reason 🙂 ). I was really glad to have spent our last day on Isabela appreciating this wonder, however. Volcan Sierra Negra was one of the largest and most active volcanic craters on earth, having erupted 8 times in the last 100 years (including a modest eruption in 2018). The 11km wide caldera at the top of the mountain was very impressive, even more so were the lava fields from the most recent eruption where you can walk around and see clear demonstration of the layered lava from different eruption events and the sulphur deposits that come out of the mountain.

Wendy has also written about our less than enjoyable departure from Isabela. I’ll pick up the story after we reached our third Galapagos Island – Santa Cruz. While Isabela was the winner for most amazing wildlife experiences the few nights we spent on Santa Cruz were probably the most relaxing and enjoyable.

We stayed in a beautiful cottage nestled in fantastic gardens, just a couple of hundred metres off the “main drag” of Puerto Ayora, the population centre on Santa Cruz (and largest town in Galapagos). The more private and comfortable accommodations gave us some great opportunities for relaxation after a pretty busy schedule on Isabela and San Cristobal.

Isla Santa Cruz is home to a truly stunning and mostly empty white sand beach (Tortuga Bay), as well as some other unique environment for swimming and snorkeling. We got a chance here when we weren’t relaxing to swim with (small) sharks, hang out with a lot more Marine Iguanas and enjoy a number of nice hikes. Santa Cruz also gave Wendy and Caleb another opportunity for Scuba Diving (at nearby Seymour Island) and Caleb and I a chance to see more amazing Galapagos Giant Tortoises in the wild and explore some long lava tunnels in the Island’s highland interior. 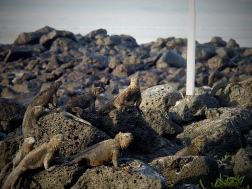 Kieran after a swim at Las Grietas

Caleb at one of Santa Cruz’s long (>1km) lava tunnels, formed when the outside of a lava flow cools but the middle keeps moving

More Giant Tortoise in the wild!

A Few Thoughts on Food and Cooking:

None of our Top 100 Food and Drink items were from Ecuador, but that doesn’t mean we didn’t get up to some good eating. There were a lot of rice dishes on the menu and a lot of seafood, especially in the Galapagos. We posted on Facebook a couple of weeks ago about some of the fantastic seafood we enjoyed on the street in Santa Cruz. The boys are also slowly starting to become more adventurous with local food, which is great.

Two other highlights: the delicious Canelazo cocktails (Sugar Cane alcohol with Lemon and Cinnamon) we enjoyed to warm up a cool night wandering the streets of Quito and Ecuadorian Locro de Papa (potato) soup, another cool weather treat. Wendy has become quite adept at whipping this up for us as we travel and it is a recipe I expect will will bring home to Canada for regular use. 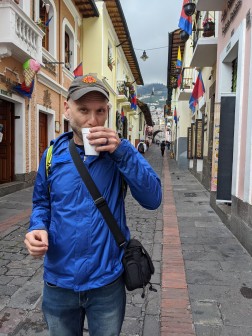 Enjoying a Canelazo in Quito

Seafood platter on the streets of Santa Cruz

The primary reason we put Ecuador on the itinerary was for the Galápagos Islands, a bucket list destination for both Wendy and I. Encounters with the Galapagos Giant Tortoise and Galapagos Penguins both made our Top 100 Activities list. Our experiences there, as I hope our previous posts have communicated, did not disappoint. The unique and unspoiled ecosystems found on the Islands are amazing to behold, the proximity we had to the wildlife was really neat, the diving was unique and they were really nice places to hang out as a family. We’d recommend them to anyone looking for a unique travel opportunity, especially with kids.

Most visitors to the islands visit by private boat cruise which can make for a very expensive trip. We found visiting them independently and staying land based (apart from day trips) to be very effective for our plans and made the experience significantly more affordable. Occasional rough seas and the brutal at times equatorial sun were the only things that got in the way of our enjoyment (the kids would probably add lack of useful wifi to that list).

In addition to the Islands, the cooler climate cities here were also very pleasant. We enjoyed the days we spent poking around both Quito and Guayaquil, which I think many travellers pass over (unwisely) in favour of the going straight to the Islands. Ecuador as a whole seems a relatively clean, relatively safe place to visit, I hope we will have a chance to return some day. 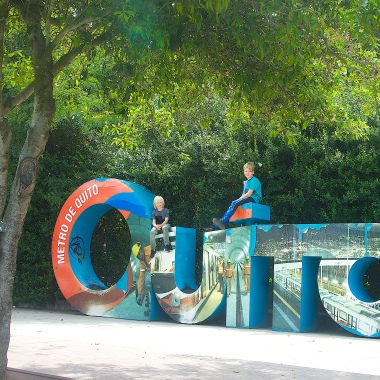 In Quito we didn’t do much because we were only there for four days but at least we did something. We went on a walk to see different things that helped Ecuador claim Independence. On the second day we went on an adventure up to the top of a mountain and went to a museum on the Equator, I thought that was cool. On the third and pretty much final day we went to the park: we went paddle boating, walking and taking pictures. I enjoyed our stay in Quito I recommend it to travelers looking for somewhere to go.

In San Cristobal we walked around, went to a museum and walked to a beach to swim and watch the sunset. On day two we went snorkeling at Kicker Rock. That was pretty much it. Did you know that the Galapagos Islands were made from volcanoes?

On the first day on Isabela we went to a five star restaurant (or at least that’s what the sign out front said!). The next day we split up and me and my mom went to Los Tuneles and Caleb and my Dad went to Tintoreras. All of us went to the wetlands to see the flamingos, but not all together at the same time. I thought that Isabela was the best island. My favourite part was seeing penguins.

On the first day we did nothing at all but on day two we bought ice cream and went to Tortuga Bay. On the third day mom and Caleb went diving. On the last two days we did nothing. My favourite part was doing nothing.